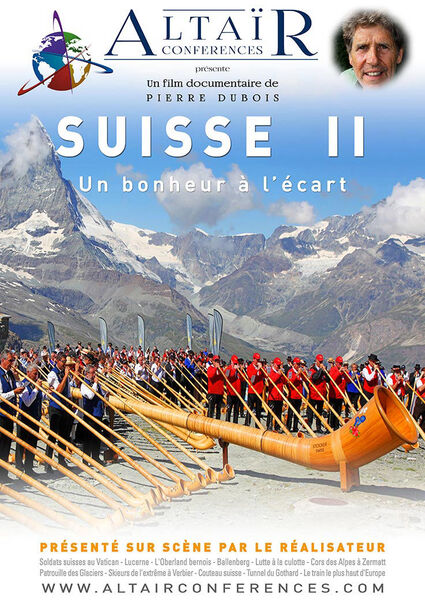 In this country, 65% of which is covered by the Alps, the constraints of the soil have shaped the Swiss and made them unique among European states.

Poor at first, lost in their mountains, with no raw materials and no access to the sea, they turned a hostile environment into a prosperous and coveted land. A Switzerland that is strong only in the resources of its people, who have remained more attached than others to their roots, their myths and their Alpine traditions. Pierre Dubois will tell you with passion about his country, a jigsaw puzzle in which each piece has gradually built a modern, innovative and strong Switzerland. A country proud of its past, which jealously preserves its peasant values, this deep-rooted Switzerland which keeps its feet on the ground, its eyes turned towards its exceptional panoramas, its glaciers and its lakes, mirrors of the Helvetian soul. He will introduce you to the smallest army in the world: the Vatican's Swiss Guard, which has protected the popes for six centuries, and to those forgotten by history, the Swiss soldiers who defended the kings of France. The new Gotthard railway tunnel under the Alps, the longest in the world, which links Europe from north to south, and in the Bernese Oberland, the highest cog railway in Europe, which takes passengers to the top of the Jungfraujoch at 3454 m above sea level, crossing the walls of the Eiger and the Mönch. But also Lucerne, Brienz, Interlaken, Ballenberg, the Swiss national sport: wrestling, the glacier patrol, the Xtreme in Verbier, Zermatt and the Matterhorn. A film that invites you to discover new facets of Europe's most marginal country and the values that resonate in the hearts of the Swiss.