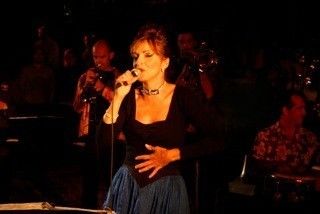 This all-terrain actress/singer, as she defined herself (it’s written on her business card…) has move from theatre to singing for a long time now.
From a classical background (Dramatic art and song in Nimes conservatory) her carrier start in Roseau theatre in Paris, and love bring her in Provence. She has work with various companies in the region (Haute Provence Theatre, Ebagne Company, Pictur’Music, Tetra Art, Atelier du Possible, Maqiis Theatre, Mots à Mâcher, Macompanie…) on classical and contemporaries projects mixing theatre and music most of the time.
Completely crazy mezzo-soprano, she works also for 12 years with the “Compagnie la Rumeur”, she is a founding member. This company from Marseille has a duty to show classical music and opera in other places, in the streets, on the squares, on the beaches with floating or rolling piano...
With Félicien, her barrel organ, she create, like a real street singer "Zab et la Boîte à Vent", a song and handle tour who messed up grandmas haircut and remove the baby pacifer from their mouths!
Isabelle Desmero, the Lyricomédienne, the Chantatrisse, it’s a must see singer!