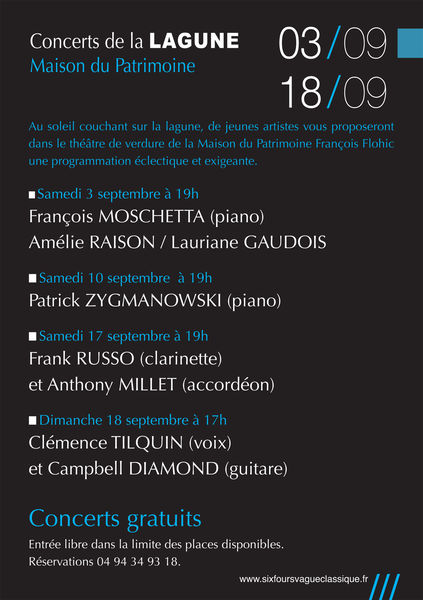 As the sun sets over the lagoon, young artists will offer you an eclectic and demanding programme in the green theatre of the Maison du Patrimoine François Flohic.

With a scholarship from the German government, he studied with Gerhard Oppitz at the University of Music and Arts in Munich.

Passionate about chamber music, he obtained several First Prizes in international competitions. In 2007, he was awarded the Delmas Prize by the Académie des Beaux-Arts.

The critics hail him as "a sensitive and attentive performer, who carries his partner with elegance and authority" (Le Monde de la Musique) and a "sensitive pianist, who shows intelligence and humour" (Classica).

He participates in numerous festivals in Europe and throughout the world, such as the Festival de la Roque d'Anthéron, the Festival de l'Orangerie de Sceaux and the Young Artists Festival in Kyoto. He performs as a soloist in several countries: the United States, Finland, Italy, Switzerland, Germany, Korea...

Patrick Zygmanowski holds a Certificate of Aptitude as a piano teacher and is a professor at the École Normale Supérieure de Musique de Paris.