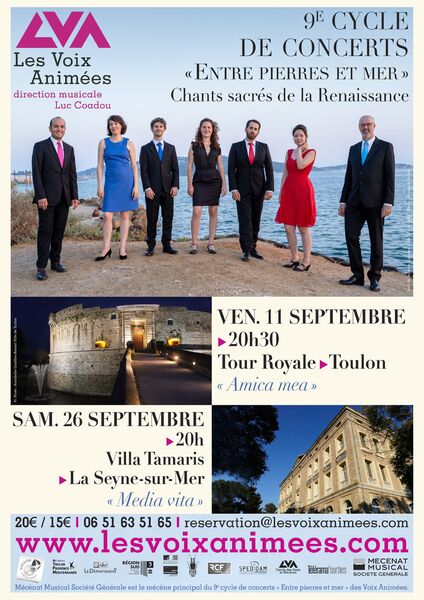 "Media vita" as part of the 9th concert cycle "Between stone and sea" (sacred songs of the Renaissance).

Mourning and sighs at the Emperor's court...

Les Voix Animées take you to Vienna and Prague during the reigns of Maximilian II and Rudolph II. Philippe de Monte, Kapellmeister of the imperial court, was a European composer who, before succeeding Jacobus Vaet in this prestigious position, travelled the continent from Naples to London.

Like his contemporary Orlande de Lassus, Philippe de Monte excelled in all musical genres, sacred and secular. "Ultimi miei sospiri" is one of his most famous madrigals. Les Voix Animées offer you the parody mass which, at the level of its model, will plunge you into a deep feeling of finitude.

Les Voix Animées, in partnership with the Toulon Provence Méditerranée Metropolis, the City of Toulon and the Centre des monuments nationaux, offer three programmes. This year, Les Voix Animées invites you on a musical journey to the heart of the Holy German Empire during the reigns of Charles V, Ferdinand I and Maximilian II of Habsburg.

Extra cost: 20 € / 15 € reduced rate (with supporting documents) for groups of more than 10 people, RSA recipients, jobseekers, students, recipients of a CMI invalidity benefit / Free for children up to 10 years old. Reservations are strongly recommended because of limited capacity.