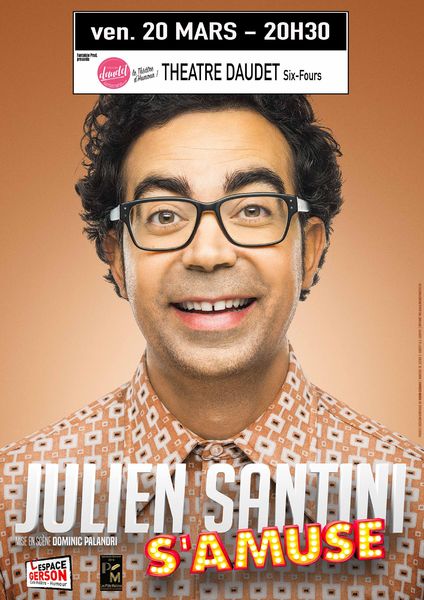 Julien Santini is a comedian who talks about himself like nobody else since he has been practicing for a long time.

n the show Julien Santini s'amuse, you'll find :
1-The Enrico Macias look-alike without the accent but with the shirt...
2- A declaration of love to the Civil Service
3- A chase, at the office, between Martine and Bibou the pervert, a totally cult scene!
4- A mischievous side, rebellious to ambient conformism, but with a smile and a lot of politeness.
5- An interpretation of "love at first sight" that won't leave you "indifferent".

Julien Santini grew up in Corsica, and left his native island at the age of 17 to join the Myriade course in Lyon, directed by Georges Montillier of the Comédie Française. He plays Molière, Beaumarchais, Sartre, but the desire for more personal projects makes him leave the bosom of the national stages. In particular, he began writing his first novel, "La vie, les femmes, Claude Lévi-Strauss et moi", which will be published later, in 2015, by Matopée, Editions numériques.

Previously, largely inspired by the novel, the original version of his show, then entitled "Lettre sur un réfrigérateur" (Letter on a Refrigerator), was born. In 2014, the Lyon public discovers the man who will turn out to be a real phenomenon, as the craze for his strange character is immediate. It was at the Espace Gerson, whose reputation as a talent scout is well established, that he made his debut and met actor, author and director Dominic Palandri (Apéro Thérapie, Les Zycos, Carton Rouge). Their collaboration resulted in a rigorous writing and directing style and a precise acting style, giving the young actor the opportunity to take off again.
Julien Santini continues his journey today in Avignon, and has many surprises in store for us...