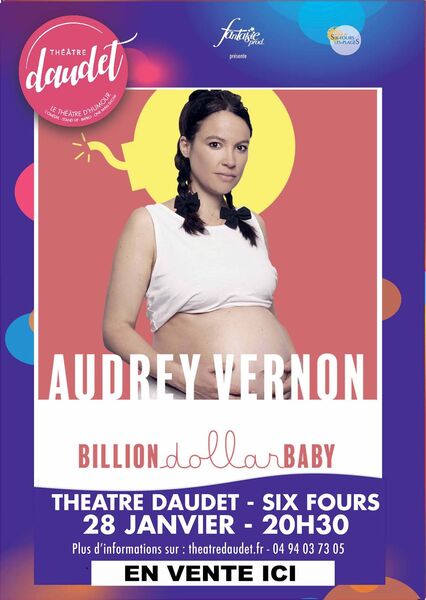 After How to Marry a Billionaire, which castigated the world of the ultra-rich, Audrey Vernon wants to save the planet and make the world green again... while there's still time!
Pregnant, she explains to her future baby the world in which he will be born.

Between a false air of innocence and hard-hitting jokes, his story takes us on an ultra-documented epic of a dehumanised civilisation, where we are more likely to die of heat or be riddled with bullets (invented by the conquering white man, who has obviously not fully understood the "thou shalt not kill" rule) than to be devoured by a wild beast...

"I could have had you born during the Trente Glorieuses, the Belle Epoque...no, you'll be a mass extinction, a rare thing that only happens every 30 million years...but it's great to see the end of the film! "

Taking the side of laughing at the climate collapse, the actress serves up a striking text and proves once again that militant theatre can be as funny as it is intelligent. Mischievous and pugnacious, she gives us hope that our eyes will remain wide open and our hearts on the alert. Because Billion dollar baby is first and foremost a question of mad love: for your fellow man.