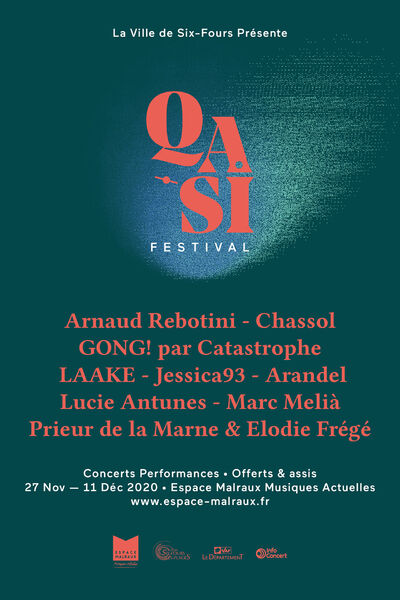 Chassol
Born in 1976, Chassol discovered music at the age of four. The son of an amateur saxophonist father, this "black kid" joined the Conservatoire while others joined the army. He spent sixteen years there, starting by learning harmony, scales and melody. Traumatised very early on by the soundtrack of the film "La Tour Infernale", the young Chassol quickly understood that he would not release his first album at the age of 20. No, indeed, his initial ambition was to compose for the cinema, secretly uniting sound and image to produce film music of great elegance in the tradition of Jerry Goldsmith, Michel Magne and Quincy Jones, among others.
In the mid-90s, Chassol moved to the darkened halls of cinemas, where he spent fifteen years composing for the big screen, television and advertising.
Between 1994 and 2002, Chassol found time to become a conductor, then discovered the world of pop music while accompanying Phoenix and Sébastien Tellier. Jean-Michel Basquiat's young double directed the arrangements on "Politic" (2004).
"I am a musician who creates serious and accessible music in a pop music format", explains Chassol in order to get out of the niche markets in the ghettos, where so many others bask. A disciple of the minimalist music school (Steve Reich, John Adams) and passionate about pop culture, this Parisian loves to get off the beaten track, as shown by his "ultrascores" (composed on the basis of sound elements from a film) for Nola Chérie (which accompanies this first disc "X-Pianos" as a DVD supplement), Indiamore (his second DVD / CD project) or Big Sun (2015) and Ludi (2019).

Prieur de la Marne & Elodie Frégé
L'Enfer, after Henri-Georges Clouzot, 1964
For the first time the images from Clouzot's aborted film were edited to tell the story of a day and a night in the life of Serge Reggiani's character, Marcel. Elodie Frégé plays Odette, Romy Schneider's character.
Marcel suffers from paranoia. Every morning, when the train crosses the nearby viaduct, a new crisis breaks out in his home. He is then caught in visions of his wife in the arms of another man. Romy Schneider is more beautiful there than ever.
Elodie Frégé plays the character of Romy Schneider, sometimes addressing the spectator and sometimes the character of Reggiani.
The music played by Prieur de la Marne proposes a curious swerve into the heart of Marcel's unconscious.