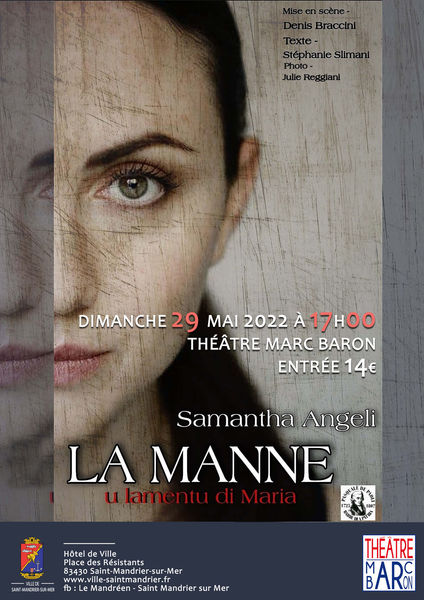 La Manne is a one-woman show, an ode to love and resistance in the heart of Corsica.
In the half-light, a young woman whispers a story as only Corsica can give birth to. A story as sublime as love, as violent as life.

Inspired by the true story of Maria Gentille, nicknamed the Corsican Antigone, La Manne is a lament, the cry of a young woman in love, addressed to the earth and to heaven.
Oletta, 1769, a plot is organised against the French troops, it will fail, but several men will be condemned to terrible torments, and among them, Maria's fiancé. Hanged in the square, they are denied a burial.
La Manne opens with the face of a Pieta: that of a young woman who, in the half-light, whispers a story as only Corsica can. A story that is both sublime and violent.
She tells her passion. The beginnings of a love cradled by the mineral nature of the island. An infinite love, torn apart by this tragedy.
Like an ode, Maria, in a language mixing simplicity, poetry and brutality, tells of a destiny that was not a choice but a necessity, like that of the ephemeral butterfly to give birth before disappearing.